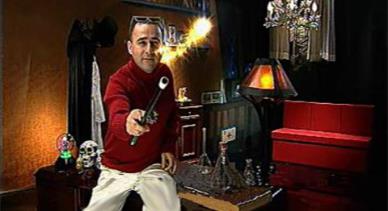 Magic and science seem to be opposites - one is formed by facts, the other by illusions; one seeks to verify, the other to mystify. However, they are more alike than one might think. Science explains what magic makes us wonder…

Magicians can’t do the impossible; they can appear to, by using basic scientific principles of physics, chemistry, math and the art of performance, to create stunning effects. Science captivates our minds and inspires our thought. Magic fascinates our eyes and amazes our senses.

The movie grants us a rare opportunity to take a walk on the dark side of science and get behind the scenes of the making of magical mysteries. In a 25 minutes show, its hosts, a scientist and a magician, are joined to show magical illusions, based on important science concepts. Together, they demonstrate how many familiar classical magic tricks are founded on scientific innovations and present the scientific explanation underlying in them.


During the movie, viewers will be exposed to many special effects such as 3D glasses, interactive trivia games, water sprays and scents spreading in the theatre to maximize the experience and many more surprises.

Spectators will enjoy learning how to create a magic show, how to do magic tricks with everyday objects, and who did what in the history of magic