Israeli scientists began to investigate the secrets of outer space as early as the 1950s. Thirty years later, with the launch of the  Ofek 1 satellite, Israel proudly joined the exclusive club of space explorers. Today, thanks to its ever-evolving innovation and technology, Israel is positioned among the world's top ten countries in space exploration, with cutting-edge activities that involve communication and research satellites, space telescopes and numerous international collaborations.

As Israel's National Museum of Science, Technology & Space, MadaTech seeks to introduce the public to the fascinating world of space exploration, with a special focus on Israel's trailblazing space technology and research. To do this we have partnered with  Israel's Ministry of Science, Technology & Space and its Israel Space Agency (ISA), as well as the Israel Aerospace Industries (IAI), in developing an exciting, interactive and hands-on exhibition which we call Blue & White in Space.
Concept & Goals: arousing the public's curiosity
The Blue & White in Space Exhibition will expose its visitors to the thrilling story of space technology and exploration, emphasizing the important part played in this quest by modern Israeli innovation.  A special focus will be placed on the life and mission of the first Israeli astronaut, Ilan Ramon, who tragically lost his life in the Space Shuttle Columbia disaster.
Utilizing a wealth of interactive exhibits, life-size models, advanced simulators and exciting hands-on activities, the Exhibition will aim to attract, educate and enthrall visitors of all ages. Specially developed tours and programs will address the younger visitors, sparking their curiosity and motivating them to learn more, and to eventually develop their interests in related careers that will contribute to the future of Israel's space exploration.
The Blue & White in Space Exhibition will be built on a total area of 500 square meters, divided into four main sections:
Area 1: Building, launching and controlling satellites
Designed with a futuristic feel, this area will feature real satellite parts, as well as interactive simulations of satellite physics, engineering, construction and operation. Visitors will experience the thrill of launching and controlling a satellite and sending it into orbit, while receiving real data from Israeli satellite Ofek 1.
Area 2:  Satellite uses & applications
Constructed as a control room, this area will demonstrate how important data – such as ground temperature, topography and levels of radiation - are measured and collected with the aid of remote sensing satellites. Visitors will use cameras, instruments and devices aboard a true-to-life Ofek 1 model to gather data from their surroundings, while radar and TECSAR satellites scan and map the exhibit's constantly changing floor surface.
Area 3: From the legend of Icarus to present-day satellites
This historical exhibit will be constructed in the form of a 15-meter-high dome, depicting the development of aviation and space exploration from antiquity to our own time. Beginning with the dreams of Icarus and Daedalus in ancient Greek mythology, the exhibit will proceed through Leonardo's inventions, Bernoulli's principles, the Magdeburg hemispheres and hot air balloons, all the way to present-day jet planes, space shuttles and satellites.
Area 4: Beyond the horizon
This interactive environment will showcase future space technologies, research and developments, giving visitors a taste of everyday life in space. Israel's accomplishments in space will be highlighted, with a special place given to Israeli astronaut Ilan Ramon, who was killed in the Columbia disaster. Ilan's story and research will be featured alongside real pieces from the Columbia Space Shuttle. 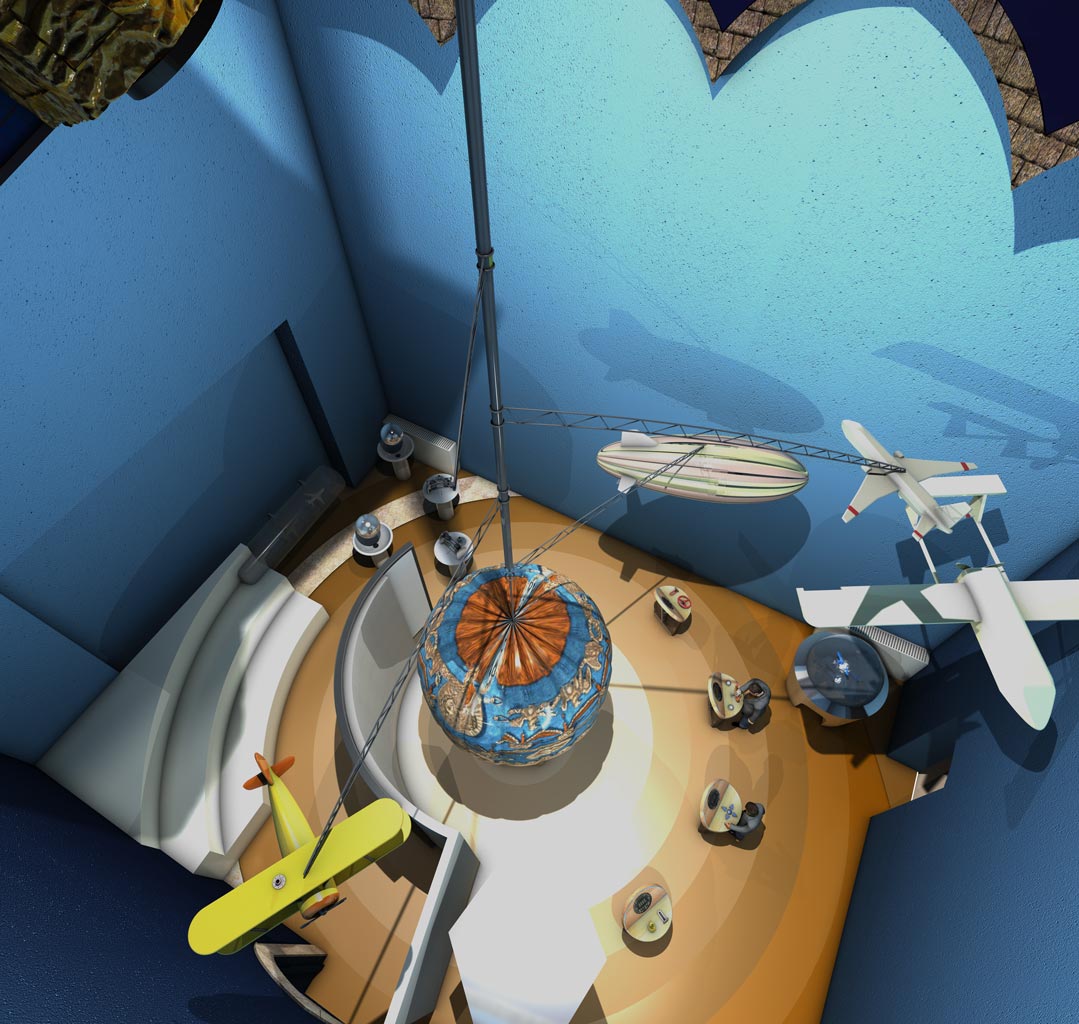 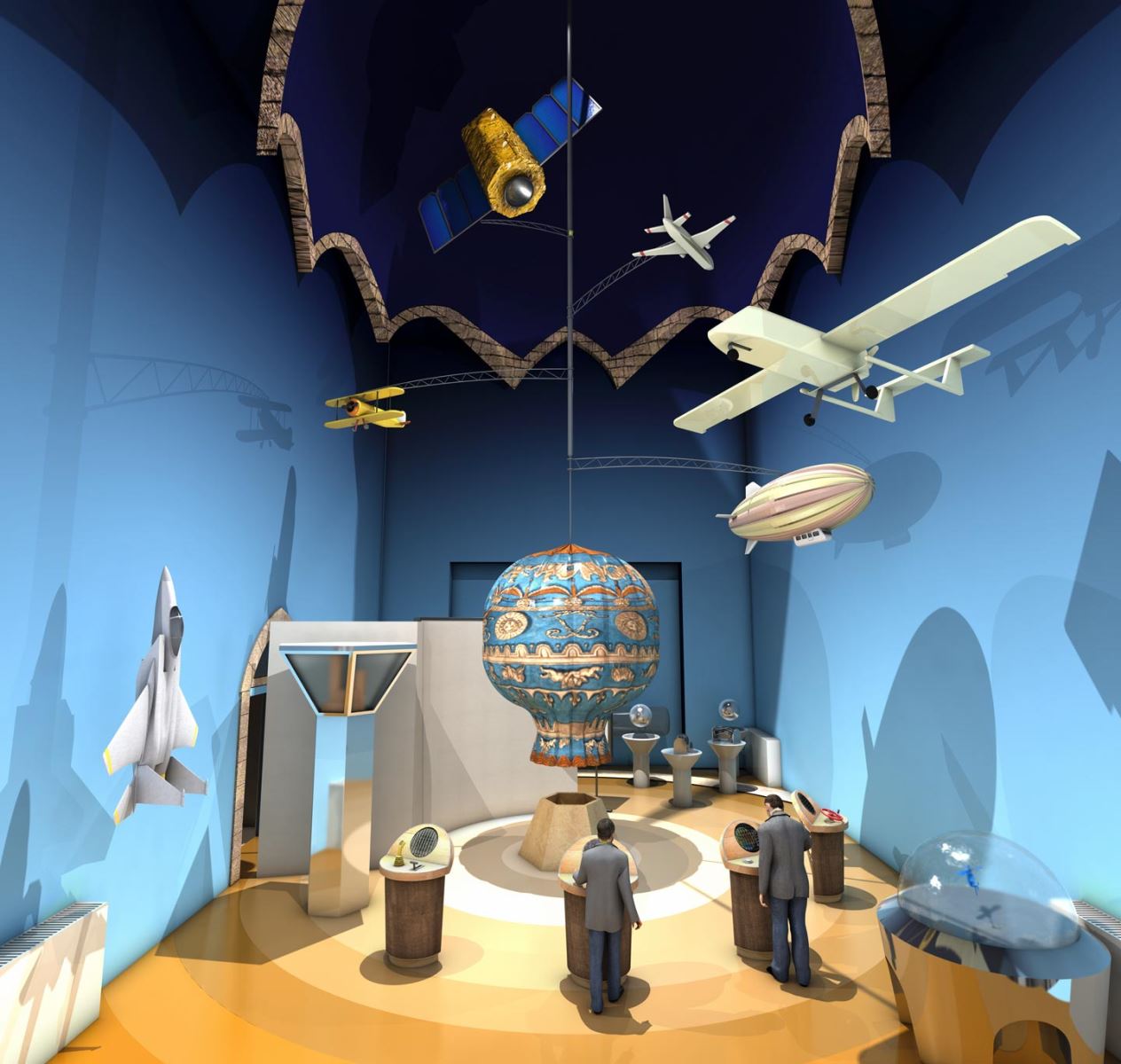 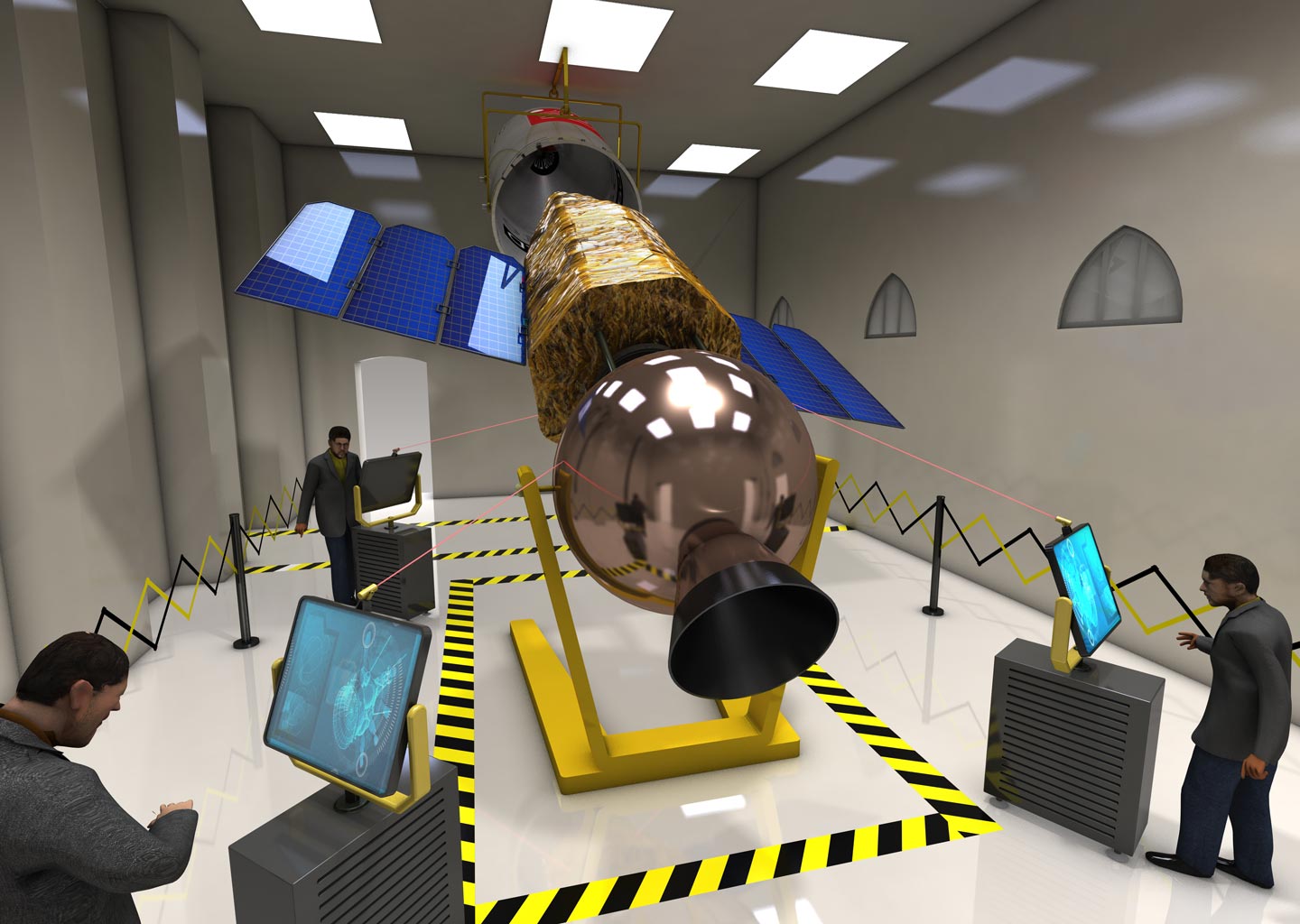 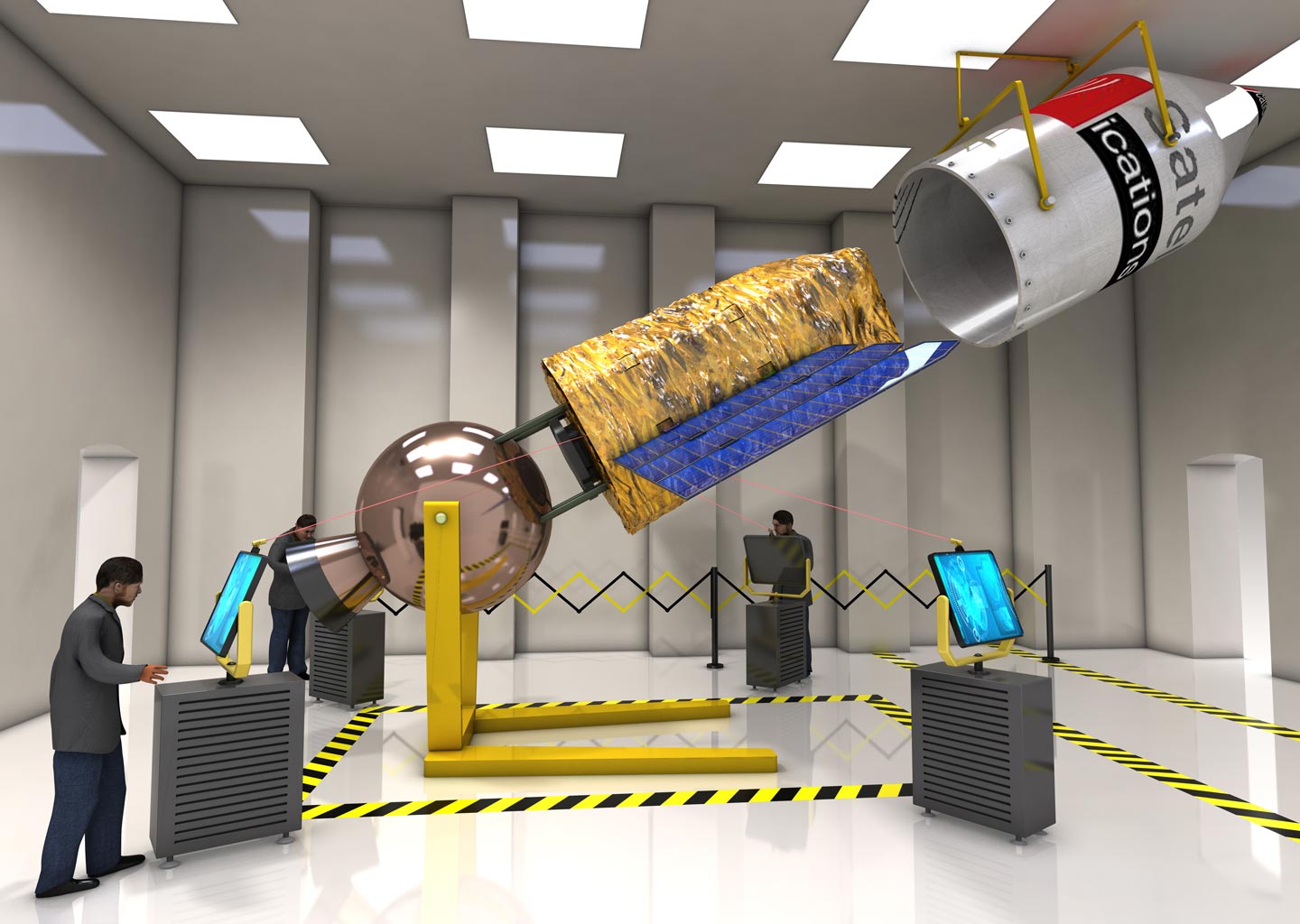 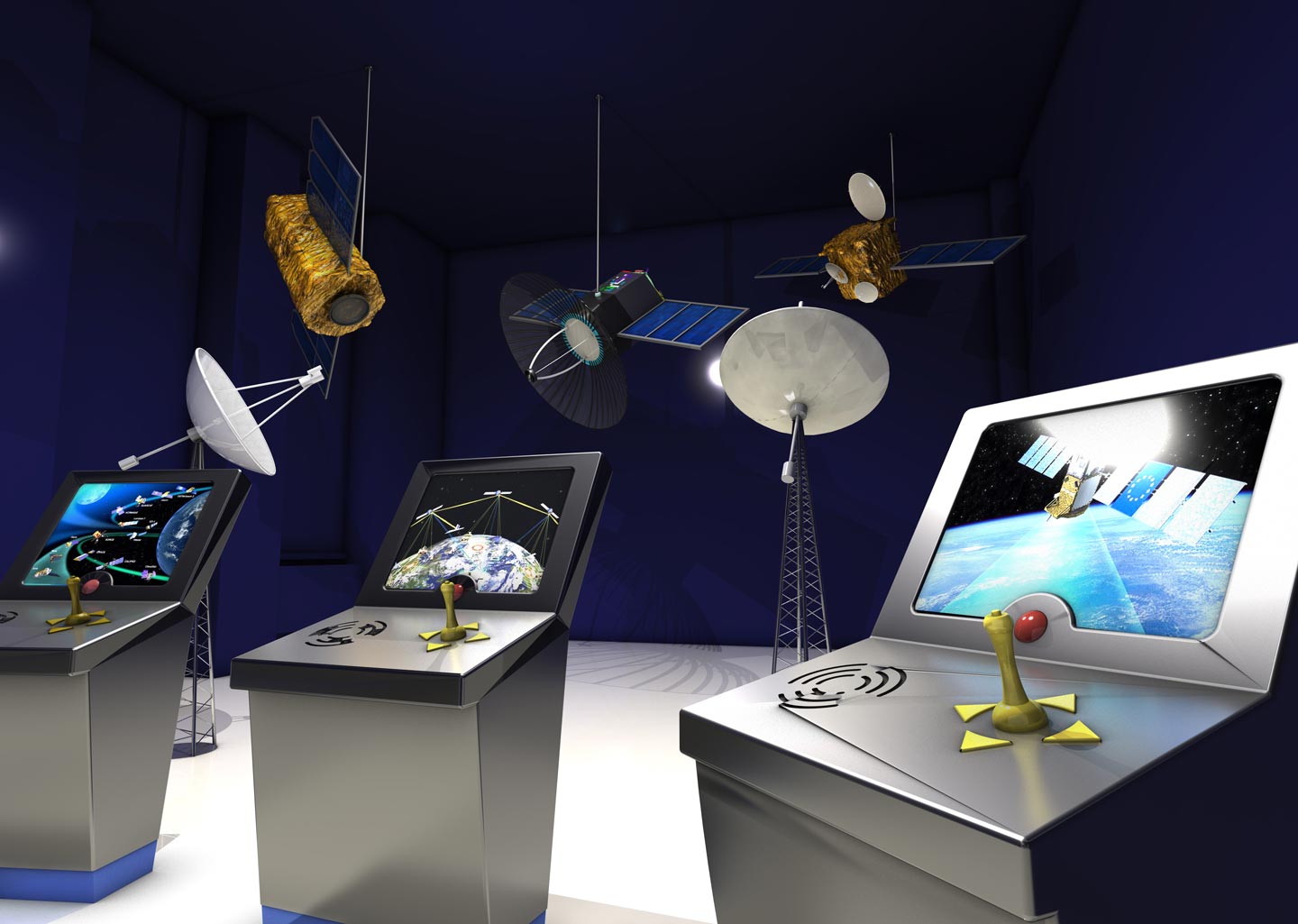