In da Vinci's time, production was carried out in workshops, where labor was basically manual and many men were employed at repetitive operations. Da Vinci's creative, perhaps even prophetic mind sought ways to replace human labor with machinery. These machines should be thought of as his vision of automation – mechanical systems which offer greater accuracy and efficiency, and higher rates of output than their human counterparts. It may justifiably be said that he prefigured the industrial revolution, hundreds of years before its time. 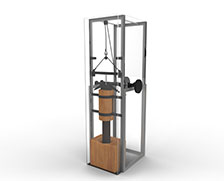 Automatically' drive a pile into the ground with little effort, using the basis of the moder-day haydraulic hammer and pile.
Read more
Lathe 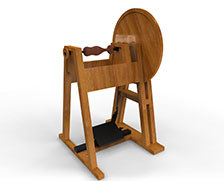 This device is a precursor of the traditional sewing machine.The user steps repeatedly on the treadle, observing how the crank converts the foot's up-and-down motion into rotary motion, and ..
Read more
Automatic File Maker 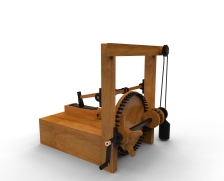